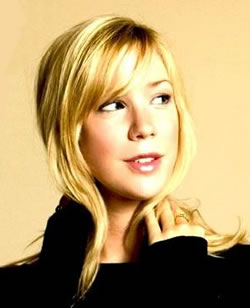 She is a steady warm presence, and she handles adeptly the balance of grace and appeal to sensuousness that is an earmark of many jazz-vocal greats...
-Peter Monaghan, Earshot Jazz Magazine

Hailing from the small town of Bellingham, Washington, twenty one year old Courtney Fortune began cultivating her musical niche and crossover style at an early age while performing at venues in Seattle. As her music blossomed she found a loyal and enthusiastic following in Japan and the UK, playing sold-out shows in Tokyo, Kyoto, Kobe and an array of clubs across London. After moving to Los Angeles she started her collaboration with four-time Grammy nominated composer/arranger Chris Walden, chosen as the featured vocalist for The Chris Walden Big Band and lyricist for a number of pop, jazz, and folk projects. Together they began work on her debut album, "Speak Love" - an accumulation of her many vintage and modern influences, which shine through her original work and those co-written with the acclaimed composer. With songs that feature lush orchestras like "You're Starting to Feel Like Home" to the Django inspired "Lost in the Memory" and the bare bones of the sultry "I Love the Way You're Breaking My Heart" - Speak Love offers an eclectic snapshot of a young singer and songwriter on the rise.