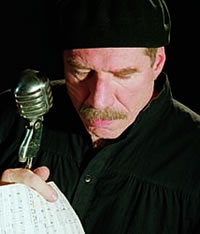 If the Rolls Royce could sing jazz, it would assuredly sound like Giacomo Gates.
Dan Singer, In Tune International

For the last two years in a row, Giacomo Gates has been voted Talent Deserving Wider Recognition in Down Beat's Critics' Poll (2001, 2002). In 2003, DownBeat voted Gates in the category of Rising Star.

Growing up around his musical father, Giacomo Gates was exposed to classical and big band music from a very young age. He studied tap dancing and later guitar Ö however at six years of age, he didn't want to dance at a recital. The instructor said, "If you won't dance, you'll have to sing," an easy choice for Gates. Playing guitar and singing through his teens, Gates became acquainted with American standards and played music for enjoyment. Ironically, one of Giacomo's primary influences, the great Eddie Jefferson, was himself a tap dancer, as well as the founding father of Vocalese. The comparisons of Giacomo to Eddie Jefferson (who passed away in 1979) are unavoidable. Owen McNally of The Hartford Courant has written, "Giacomo Gates, a bebop and blues singer, is keeping the tradition of Eddie Jefferson alive and well."

In 1995, Giacomo Gates released his debut CD, BLUE SKIES (DMP), produced by the late Helen Keane, who was known for her long, professional relationship with Bill Evans. On this recording, he emerged not only as an inspired singer in the finest Vocalese tradition, but also as a brilliant lyrical composer. Lyrics were penned to Thelonious Monk's "Five Spot Blues" and to the well-known solo taken by Charlie Rouse. Gates called it "Five Cooper Square," the address of the famous club. Ms. Keane remarked of Gates, "He's a wonderful singer . . . his phrasing, his musicality, his time sense is fabulous." In 1996, BLUE SKIES reached #24 on the Gavin List.

JazzTimes' Sid Gribetz penned, "Gates is a smoky, deep voiced singer, full bodied, richly textured and swinging, bringing animation to bebop, ballads and blues." This CD contains the rapid-fire tempo of "But Not For Me," with its lyricized Chet Baker solo, as well as the title track "Fly Rite," a vocal version of Monk's "Epistrophy." Also, Lee Morgan's "Speedball" (with Gates' own lyrics) and Gillespie's "Night in Tunisia." He also provides a 'bare-bones' performance of "You Go To My Head," making this a truly original and exciting collection. FLY RITE achieved even greater radio exposure, hitting #17 on the Gavin List, and receiving Four Stars in Down Beat magazine.

In addition to Gate's appearances with artists Lou Donaldson, Randy Brecker, Jon Faddis, Richie Cole, Hilton Ruiz and Freddie Hubbard among others, he is intimately involved in Jazz education. He regularly imparts his unique perspective to willing students at clinics and workshops for universities, festival and schools of music, along with teaching at Wesleyan University and the Hartford Conservatory of Music. One of his more popular workshops, "In Tune and In Time," has received rave reviews by educators, students and musicians alike.

Giacomo Gates has long been recognized among the ranks of international Jazz vocalists. Bob Agnew of L.A. Jazz Scene writes, "Giacomo Gates is simply quite unique."