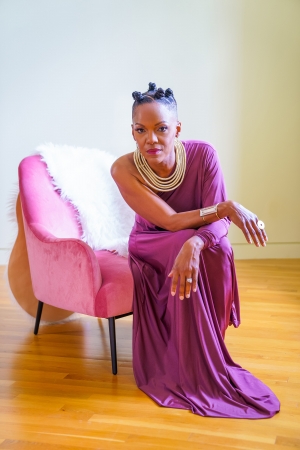 What Freelon is building is not just a castle of love, but an expanded repertoire for jazz singers...
Washington Post

Multi GRAMMY® Award nominee Nnenna Freelon is known worldwide as a compelling and captivating live performer. Recently, Nnenna starred in the critically acclaimed show "Georgia on My Mind: Celebrating the Music of Ray Charles" - no stranger to the music of the master singer - she toured with Ray Charles, as well as many other greatest jazz artists including Ellis Marsalis, Al Jarreau, George Benson, Earl Klugh, Take 6, and others.

Accolades and awards have abounded - performances at The White House, headlining the Asia Pacific Economic Summit for 300 Presidents, Premiers and Heads of State, receiving the YWCA of North Carolina's inaugural "Legend Award" for her outstanding artistry and her dedication to education, and so much more.

Educating young people, both musicians and non-musicians, and students of all ages has propelled her advocacy - Nnenna toured the United States as the National Spokesperson for Partners in Education. Her master classes and workshops, from "Sound Sculpture" to the ground-breaking "Babysong," teach adults and children that you too can change the world - even one person at a time - with her anthem "One Child at a Time" found on her "Soulcall" recording. From Partners in Education to the United Way, Freelon has been a tireless advocate and fundraiser for education and arts causes.

In the midst of a burgeoning activity schedule, 2019 and 2020 also brought profound challenges and loss. In 2019, Nnenna's husband for 40 years, renowned architect Phil Freelon, passed away after his battle with ALS. Within six months, Nnenna's sister, Dr. Debbie Pierce, passed away from cancer.

In her efforts to find her voice amidst these challenges Nnenna has begun to emerge with new ways to share her feelings, express her experiences - a new podcast called Great Grief and a new recording, her first studio outing in 12 years entitled Time Traveler are slated for release on Origin Records in the spring of 2021.

From Nnenna's turn in What Women Want (featuring her hit If I Had You) starring Mel Gibson and Helen Hunt to her own production (as writer/composer, singer/actress, producer) of the theatrical musical play "The Clothesline Muse," to her triumphant role in composer Laura Karpman's undertaking of Langston Hughes' "Ask Your Mama" at The Apollo Theater and at The Hollywood Bowl with opera superstar Jessye Norman and the indie phenom band The Roots, she continues to wow audiences at SRO shows - even as she embarks on new avenues.