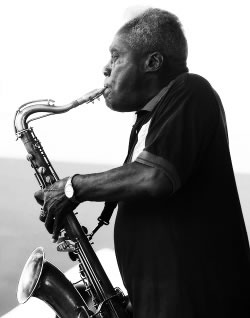 Floyd Standifer, a giant on the Seattle jazz scene, died Monday night at Virginia Mason Hospital. He was 78.

In his early years on the Seattle jazz scene, Standifer, a trumpeter, saxophonist and singer, played at local clubs with such future stars as jazz trumpeter Quincy Jones and pianist Ray Charles.

The city of Seattle has twice honored him, proclaiming "Floyd Standifer Day" on May 9, 1996, and again on Oct. 20, 2000. During the same year, former Mayor Paul Schell honored him at the Earshot Jazz Festival "for being Seattle's most respected jazz master and premiere bebopper."

Until last fall, when he became too ill with cancer to play, Standifer was a fixture at the New Orleans Creole Restaurant, where he and his group played Wednesday night gigs since 1986.

Seattle jazz drummer Clarence Acox, jazz band director at Garfield High School, performed with Standifer since the beginning and continues to play as part of the Floyd Standifer Group each Wednesday at the New Orleans.

"It was pure joy performing with him because he was a great musician, and the music we were playing was at a very high level, but he never played above people's heads," Acox said.

"He presented the music in such a way that it was very palatable to the general public, but it was never compromised and it was always jazz. He had such a warm personality that people felt comfortable listening to us and listening to him talk about the music."

"It's just dreadful," Anderson said of his death. "He was my best buddy. He loved his music so much, and he was genuinely a great supporter of all kinds of music, not just jazz."

Standifer was generous with his time and talents. Over the years, he spoke to and performed for thousands of local students as part of Earshot's "Roots of Jazz" series.

"He was like a very hip Mr. Rogers in his cardigan sweater and his jazz sensibility," said John Gilbreath, executive director of Earshot Jazz.

"Whether he had a trumpet in his mouth or not, he was the personification of a jazz musician. And he set a great example for aspiring musicians, as well as music fans in general."

Standifer was featured last summer at Bumbershoot, where he performed as part of a Seattle jazz showcase.

"I wanted to do a show that spanned the generations of Seattle jazz," said Seattle jazz musician Matt Jorgensen, curator of the showcase. "Floyd was my first pick."