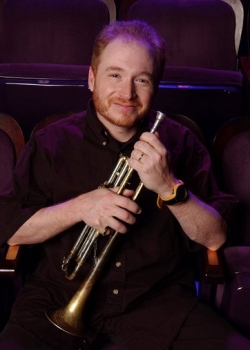 Lyric genius of the trumpet...
The Chicago Tribune

Decades after trumpeter Brad Goode cemented his reputation as a bebop phenom by performing with the legendary Bird man Red Rodney--to whom, with his own shock of red hair, he bore an uncanny resemblance--many still expect to hear him dine out on Charlie Parker and Dizzy Gillespie.

Goode, whom Dizzy himself dubbed "Little Red Rodney," has been deeply influenced by those giants. But anyone who has been paying attention knows better than to expect this innovative artist to limit himself to a single sound or style. The title of his 1988 debut album announced his intentions clearly: Shock of the New. "Playing bebop is sometimes frustrating because certain ideas I have won't fit into that context," he said in the liner notes. "I've always wanted to stretch into other areas."

Stretch he did, into electric jazz ŕ la Miles Davis, electronic funk on a catchy original featuring his clock radio, and a challenging string arrangement of "You Don't Know What Love Is." More than 25 years and 13 albums later, having established himself as a soloist of surpassing immediacy and warmth--as well as a composer of striking originality--Goode is still stretching. That his latest recording, Chicago Red, includes electric guitar, synthesizer, and sitar may not shock contemporary tastes. But his experimentation in polytonal chord cycles on many of the songs is no less bold a break from standard procedure than fusion once was.

Goode has been developing what he calls his Polytonal System for years now, going back to the eponymous 1995 Brad Goode CD. This system, which essentially involves improvising over streams of simultaneous chord sequences, was formally introduced on his 2008 Polytonal Dance Party. The music thrives on the pleasing dissonance created by, say, the guitarist playing chords at odds with the chords being played by the bassist. "It's almost like two songs operating simultaneously," says Goode. "The lower chords provide the basic progression, but there is also a logic in the way the upper structure chords relate and resolve to each other."

Or, in the case of Goode's coolly seductive use of polychords on W.C. Handy's "St. Louis Blues," create their own sonic mood. "These chords aren't what we've come to expect in jazz," he says, "but after listening a while, the music makes sense, if the right people are playing it."

With pride and delight, Goode brands his ethnically diverse band on Chicago Red as right--and then some. Guitarist Bill Kopper and keyboardist Jeff Jenkins are back from Polytonal Dance Party to take their first-rate contributions a step further. They are joined by Brazilian bassist Bijoux Barbosa, whose mastery of Latin, jazz, and classical forms is right at home in this music; the remarkable Ghanaian-born drummer Paa Kow, who Goode says "plays the perfect groove"; and hand drummer Rony Barrak, from Beirut, Lebanon, who has revolutionized the tabla-like Darbouka, introducing the Arabic drum to Latin music, jazz, pop, and Western classical and playing world tours with Sarah Brightman.

"I was never thinking in terms of world music when I put the band together," said the trumpeter. "I was drawn to each of these players because of their phenomenal talent. I waited years for Rony to do this session with us."

Chicago Red (a nickname first given to Goode by Cleveland drummer Greg Bandy) features eight original tunes, including "Intervallistic." Named after Eddie Harris's melodic system, it also describes Goode's unique intervallic trumpet lines. In a review of a performance for peers at the International Trumpet Guild Conference, John Irish describes this approach: "Goode covered the entire range of the horn, playing a series of very technical lines that would strike fear into the normal player." The album also includes a bravura jazz translation of "Vesti La Giubba" from Pagliacci, on which he improvises across the form of the entire aria.

"These guys nailed all the songs in one take," says Goode. "I remember showing the music to Bijoux the first time and expecting questions about the complex harmony. He looked through it, nodded, and was ready to go."

Born in Chicago in 1963, Brad Goode grew up in south suburban Dolton, studying various instruments from the time he was old enough to talk. His family moved to East Lansing, Michigan when he was 13. During high school, he performed in local clubs and began playing bass as well as horn. In 1978, while attending Blue Lake Fine Arts Camp, he met and studied with the great Ellington trumpeter Cat Anderson, who became a big supporter. At a summer music program, he studied and played with trumpeter Vince DiMartino, who taught at the University of Kentucky. Goode ended up following him there on a marching band scholarship.

During Goode's senior year in high school, Miles Davis came out of retirement, Ornette Coleman introduced his electrified Prime Time via Of Human Feelings, and Weather Report was riding high. Goode fully absorbed a wide swath of plugged-in music, ranging from fusion to punk rock. In Lexington, he formed Sun of Rif, which he once described as a combination of Jimi Hendrix, Ornette Coleman, and the Sex Pistols.

As the recipient of four summer fellowships, Goode played at the Aspen Music Festival with such greats as Jimmy Heath and George Shearing. At the Festival, he also played with--and acted as legal guardian to--a 13-year-old alto saxophonist named Chris Potter. Potter later joined Red Rodney's band, where he first made a name for himself.

Goode returned to Chicago to get his master's degree in string bass from DePaul University. He quickly became a regular on the club scene. At the famous Green Mill, onetime haunt of Al Capone, his working band included tenor saxophonist Lin Halliday and pianist Jodie Christian. Goode had a long-running Wednesday gig. At the city's premier national showcase, the Jazz Showcase, he got to play with legends Lee Konitz, Joe Henderson, and James Moody. He also became a regular presence at tenor great Von Freeman's weekly jam session at the New Apartment Lounge.

Volumes could be written about the rewards he reaped from his close relationship with the beloved Vonski--who teamed up with Goode on four Inside Chicago albums on SteepleChase, documenting concerts from the '90s--and other brilliant, uncompromising musicians. In addition to the colorful Halliday, with whom Goode helped make a dive called the Get Me High Lounge famous, and Christian, an extraordinarily versatile artist, there were the brash Barrett Deems, onetime drummer for Louis Armstrong, and the soft-spoken Eddie Johnson, one of the most underrated of tenor men.

Goode also formed deep relationships with two Hall of Fame former Chicagoans: Ira Sullivan, whom he met when the multi-instrumentalist was co-leading his band with Red Rodney, and the incomparable Eddie Harris, a powerful tenor saxophonist and undaunted experimentalist. "I have a big picture of Eddie on the wall of my teaching studio," said Goode. "It reminds me to practice harder." Sullivan is featured on Brad's terrific 2000 album, Toy Trumpet.

Sadly, all of these musicians except Sullivan are gone. The death this year of both Christian and Freeman hit Goode hard. "There was no one like Jodie," he said. "And as for Von--it was from him I learned it was possible to play your own way despite pressures to conform. Seeing how he dealt with this was very important to me."

In 1997, having led his own group in Chicago for a dozen years, Goode started teaching at the University of Cincinnati. He broadened his experience while in Ohio, playing five years with the Columbus Jazz Orchestra. In 2001, he suffered a serious lip injury that required him to revamp his trumpet technique. One mentor who helped him overcome that setback was the master Clark Terry. Following his recovery, Goode developed his skills as a lead trumpeter and began working steadily around the country with many big bands, and with the Cincinnati Pops, Louisiana Philharmonic, and other symphony orchestras. He also began exploring traditional jazz and working with players in that genre. His 2010 album, Tight Like This, includes the Bix Beiderbecke classic "Changes," tweaked polytonally.

Goode has been Associate Professor of Jazz Studies at the University of Colorado since 2004. His energies are largely focused on teaching these days, and his students are contributing to the jazz scenes from New York to Los Angeles. In the tradition of his mentor Von Freeman, Brad leads weekly jam sessions for young musicians looking to learn their craft. Denver/Boulder has provided new musical directions and opportunities, from West African Highlife to salsa, contemporary classical to jam bands. His reputation as a virtuoso trumpeter and as an educator transcends his bebop roots and keeps him quite active.

Will he one day end up back in the Windy City, where the Chicago Tribune honored him as one of the most influential Chicagoans of the 1980s for being a "major catalyst in the revitalization of the Chicago jazz scene?" There's always that possibility. But such a move would have to be on Goode's own terms.

"It was difficult to come out from under what people in Chicago expected of me," he said, reflecting on his early stereotyping. "Some people are disappointed that I didn't become a torch-bearer for bebop. Some of the players I came up with have actually done that. I've never been interested in stylistic preservation. I've always been interested in deepening my ability to express myself by developing my own improvisational voice. I'm just lucky I've had so many amazing people around me helping me to pursue that goal." 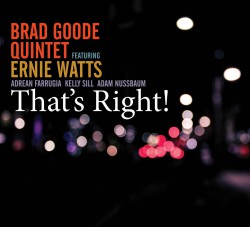 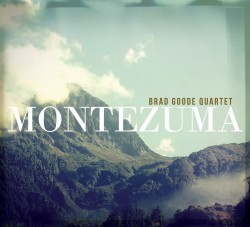