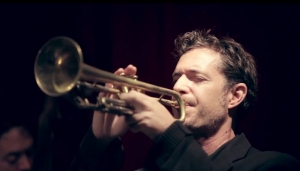 Canada-born trumpeter/composer/educator Darren Johnston's interests rotate primarily between performing all styles of jazz, purely improvised music, new music, and various other traditional musics, especially that of the Balkans, Greece, and Macedonia. He is especially drawn to music that tends to defy categorization, and is also generally open to further suggestions.

After twenty one years in the Bay Area, Johnston recently relocated to Brooklyn, NY in 2019. In the time since moving there, he has played and/or recorded withChes Smith, Dayna Stephens, Carmen Staaf, Michael Formanek, Tony Malaby, Michael Attias, Slavic Soul Party!, Raya Brass Band, The Peter Hess Quartet, Michael Vatcher, and many more.

As a composer he has written for ensembles ranging from small jazz groups, to big-bands, brass bands, string quartets, choirs, rock bands, and countless combinations thereof. He has been commissioned to write for dance, dance film, theater, video games, and by museums such as San Francisco's De Young Museum, and other presenting organizations such as the Yerba Buena Garden Festival, and Intersection For The Arts.

He has performed and/or recorded with luminaries such as Marshall Allen, Gerald Cleaver, Fred Frith, ROVA Sax Quartet, Ben Goldberg, Allison Miller, Mark Dresser, Myra Melford, Marcus Shelby, Pete Escovedo, Erik Jekabson's "Electric Squeezebox Orchestra," and many others, across the USA and around the world.

As an educator Johnston has taught at Stanford Jazz Workshop's summer program and throughout the year in their "Giant Steps" program, Jazz Camp West, The Jazzschool, and as an adjunct at UC Berkeley. As a guest lecturer he has been invited to present master classes on improvisation, "a holistic approach to music theory", and "compositional approaches to daily practice," at institutions such as Sonoma State University, Cal Arts, and others.