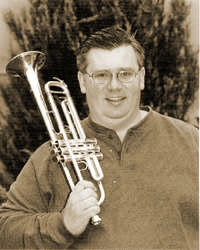 ...A sound that harkens to the days of the late Lee Morgan...
All About Jazz

Composer/ Jazz Trumpeter, Rob Walker, is active as a performer, composer, and educator. He studied composition with Herb Pomeroy at the Berklee College of Music and holds a B.A. from New York University in Film Music Composition. He did additional composition studies at The Julliard School. Walker served as film composer for Mike Post Productions in Hollywood. Walker has performed with such acts as Wayne Newton, Natalie Cole, The Temptations, Ray Charles, The Moody Blues and The Supremes, and with jazz artists such as Bobby Shew, Jeff Hamilton, Kim Richmond, Clay Jenkins, Barbara Morrison, David "Fathead" Newman, and Gary Foster. Walker exclusively plays Yamaha trumpets and flugelhorns. The jazz magazine Downbeat recognized him as a Musician Deserving Wider Recognition. As a jazz soloist, Walker appeared at the 2002 Park City International Jazz Festival and at the San Miguel International Jazz Festival in Mexico in 2000 and 2002. In 2004, he appeared with Brent Jensen along with the Lewis Nash Quintet at the Living Legends Jazz Festival. He has also shared bebop licks with such jazz masters as David "Fathead" Newman, John Heard, Gene Ludwig, Ray Santisi, Gary Foster, Bobby Shew, Lanny Morgan, Jeff Hamilton, Clay Jenkins, Kim Richmond, and Mike Vax. Rob and Brent Jensen have collaborated on a variety of projects including their latest CD on Origin Records entitled "Art of the Groove".

As one of the pioneers of music on the Internet, Walker amassed over 200,000 downloads of his original music in 2002 and was named "Best Jazz Artist/Group" at mp3.com. Walker is a member of the International Trumpet Guild, ASCAP, and the IAJE.