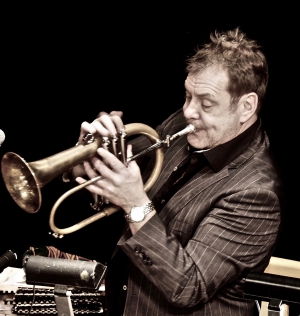 Oliver Groenewald, originally from Germany, has been living in the Pacific Northwest since 2013 and calls Orcas Island home now. Despite an early musical start on the guitar at age 5, the trumpet became the backbone of his life at 11 years old. Oliver started with classical trumpet in 1984 at the Hochschule fur Musik Detmold but his love of jazz became apparent studying in Graz, Austria in 1986. The union of these two genres gives Oliver a broad base of skills that are reflected in his playing and his writing. After finishing his studies in Graz and Den Haag, he moved to Bellingham to study arrangement with Chuck Israels at Western Washington University. He recorded 2 CDs with the European version of his "NewNet" on Jazz'n'Arts and Laika which were well received and counted to the leading ensembles of European jazz. He also recorded with Mark Murphy (West & East Music) ‎and the NDR Big Band (Verve Records). Oliver was director of jazz studies at the Hochschule fur Musik Detmold and also taught trumpet, arrangement/composition at University of the Arts in Bremen from 1997 to 2014. He was invited by several universities to give masterclasses in arranging, big band and improvisation in Europe and in the US. He is writing for the German Chamber Orchestra and many award winning musicians and bands like Richard Galliano (France) "Beoga" Ireland and "Ultra High Flamenco from Spain. He recently was commissioned by Peermusic (Peter Schilling) to write an extended orchestral version of his world-wide hit "Major Tom" (ground control).