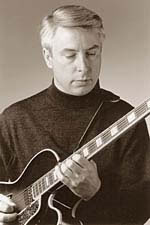 Mike Denny has been a professional jazz guitarist since 1978. His professional life has been spent in Denver, Portland, Oregon, New York, Washington, D.C., and Eugene. He has also performed in Barcelona and Paris. Among the artists he has professionally worked with are Eddie "Cleanhead" Vinson, Clarence Wheeler, Eartha Kitt, Della Reese, Buddy Miles, Sonny King, Jim Pepper, Nancy King, Mary Wells, Dick Hyman, Michael Moore, Kenny Davern, Joe Magnarelli, Paul Bollenback, Larry Goldings, Carol Kaye, and Obo Addy, with whom he recorded two albums. He released two of his own CDs in 1997: a solo effort, Looking in, and a quartet recording, Now-Here-This, both on the Origin label. He has performed with the Eugene Symphony and Cabrillo Festival Orchestra under Marin Alsop and with the Oregon Festival of American Music under Alsop and Dick Hyman. Performing regularly in the area with the Mike Denny Trio, he has been chosen to open two jazz clubs, Piccolo's and Theo's Jazz Club. Denny also leads the Mike Denny All-Stars, a quintet with trumpet and alto saxophone that is devoted to the bluesier aspects of jazz. The All-Stars will be featured at this year's Eugene Celebration 2000. Denny has been the guitar instructor at the Oregon Summer Music Institute Jazz Camp at the University of Oregon since 1994 and with the Peter Britt Festival Jazz Camp since 1999. In addition to performing, Denny teaches jazz guitar in Eugene through Lane Community College and through the University of Oregon, as well as lecture courses in the history of jazz at both campuses. He earned the B.A. in music history from the City College of New York (1992) and the M.A. in music history from the University of Oregon (1995).