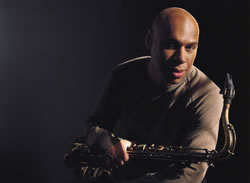 There's only a handful of naturally gifted musicians, and Joshua' s one of them. Everytime you hear him, he's at a higher level.
Peter Watrous / NY Times

Joshua Redman is the most acclaimed and charismatic jazz artist to have emerged in the decade of the 1990s. Born in Berkeley, California, he is the son of legendary saxophonist Dewey Redman and dancer Renee Shedroff and an alumnus of the jazz studies program at Berkeley High School. After graduating from Harvard College, Redman was accepted by Yale Law School in 1991, but postponed his entrance for one year to satisfy a growing desire to pursue music. Four months later, Redman's decision was confirmed when he was named the winner of the Thelonious Monk International Saxophone Competition by a panel of judges comprised of Jimmy Heath, Branford Marsalis, Jackie McLean, Frank Wess and the late Benny Carter.

Now fully committed to a career in the arts, Redman was quickly signed by Warner Bros. Records and issued his first, self-titled album in 1993, where he was featured on tenor saxophone. That same year saw the release of Wish, where Redman was joined by an all-star supporting cast of Pat Metheny, Charlie Haden and the late Billy Higgins.Over a series of celebrated recordings including Spirit of the Moment/Live at the Village Vanguard, Freedom in the Groove and Timeless Tales (for Changing Times), Redman established himself as one of the music's most consistent and successful bandleaders, and added soprano and alto saxophones to his instrumental arsenal. His second acclaimed quartet, featuring pianist Aaron Goldberg, bassist Reuben Rogers and drummer Gregory Hutchinson, made its debut on Redman's 2000 album BEYOND, and is also featured performing the saxophonist's first extended composition on the 2001 disc PASSAGE OF TIME. A year later, Redman formed a new trio with keyboard player Sam Yahel and drummer Brian Blade that is heard on Redman's, ELASTIC, and now their latest release "Truth and Beauty" is available on Origin Records.