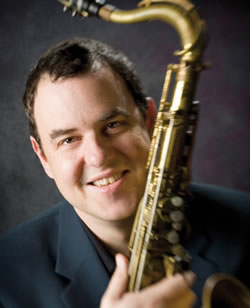 Musician Phil Dwyer has been a force on the international jazz scene for over two decades. A critically acclaimed composer, arranger, and musical director, as well as gifted, intuitive perfomer on both saxophone and piano , Dwyer has performed with everyone from Aretha Franklin, Ian Tyson, and Gino Vannelli to jazz greats like Red Rodney, Ingrid Jensen, Randy Brecker, Tom Harrell, Jim Hall, Dave Holland, Don Thompson, and many others.

Before returning to his west coast roots on Vancouver Island in 2004, Dwyer spent 15 years as one of Toronto's busiest studio musicians appearing on hundreds of recording sessions, and working as a commercial composer and arranger. He also was a regular performer at Toronto clubs Top O' The Senator and Montreal Bistro, with Dave Young, Marcus Belgrave, Renee Rosnes, Carol Welsman, Moe Koffman, Randy Brecker and many others.

Doubling on tenor sax and piano, Dwyer was a member of the Hugh Fraser Quintet when they won the Alcan Jazz Competition in 1987 and the Juno Award for Looking Up in 1988. A long-time partnership with bassist Dave Young has produced a pair of recordings including 1993 Juno Award-winner, Fables and Dreams. Phil was also arranger, composer, and conductor on Guido Basso's 2003 Juno Award-winning recording, Lost in the Stars. Dwyer has also made three recordings with Robert Occhipinti and was a featured soloist on the bassist's Juno-nominated Yemaya.

Phil has recorded three times with Don Thompson, Forgotten Memories (with Dave Holland, Claude Ranger, and Kenny Wheeler), the 2006 Juno Award-winner, Ask Me Later, and the 2008 For Kenny Wheeler. The duo's ongoing, two-decade musical relationship was underlined when Phil was chosen by Thompson to take part in the May 2006 Tribute to Don Thompson along with jazz greats Dave Holland, John Handy,Terry Clarke, and Jim Hall.

Dwyer is a frequent collaborator with Kenny Wheeler and has been saxophonist for the British-based jazz star's Canadian performances for the last 15 years. Dwyer also has several ongoing musical projects with New York-based trumpet star Ingrid Jensen, including successful tours of Europe and Mexico, and a mutual interest in community involvement.

One of Dwyer's longest and most important musical relationships is with drummer Alan Jones. They met in New York City in 1985 and played together with the David Friesen Trio, touring from 1987-1990 and recording Other Times, Other Places also featuring Airto and Flora Purim. In 2004 Phil reunited with Jones, and with bassist Rodney Whitaker onboard, recorded Let me tell you about my day, a muscular, inspired collection of powerful and playful readings in the saxophone trio format.

Dwyer and Jones recently recorded again with a new group, the Bridge Quartet, with pianist Darrell Grant and bassist Tom Wakeling. Their two recordings "Day" and "Night" are available through Origin Arts.

In 2001 Dwyer won the prestigious KM Hunter Award for Land of Sleepless Dreams, a composition he wrote for Amici Chamber Ensemble. That year, he was also featured soloist with Latvia's Liepaja Symphony. Dwyer was commissioned by CBC Radio Drama to write original music and serve as musical director for A Night at the Quinte Hotel, an evening of Al Purdy's poetry starring Gordon Pinsent.

After over 15 years in Toronto Phil returned with his family to Vancouver Island in 2004. Since moving to the island Phil has remained busy as a performer and writer, but has also become very involved in the community as a music mentor. He operates the Phil Dwyer Academy of Musical and Culinary Arts and acts as a resource to the local school music programs throughout the year. He has also been an active fundraiser for the Bill Dwyer Memorial Scholarship Fund, which each year awards music scholarships to deserving local students.

In 2008 Phil was recognized at the National Jazz Awards with awards for Saxophonist and Arranger Of The Year. Other highlights of the year included performances in Chile with Dave Young and Mike Murley, composing and performing with the the Gryphon Trio in Toronto, jazz club appearances with Robi Botos (Vancouver) and Joe Labarbera (Edmonton), and touring and festival appearances with Don Thompson, Laila Biali, and Molly Johnson. Albums with Thompson (For Kenny Wheeler) and Johnson (Lucky) are nominated for the Juno Award. As well Phil is nominated in 6 categories at the 2009 National Jazz Awards.

2009 has seen Phil arranging a symphony show for singer Sophie Milman, completing a commission for CBC Radio and the Gryphon Trio, teaching at the Banff Centre, and overseeing the continued expansion of the PDAMCA program. He is also looking forward to dates in Berlin, Copenhagen, and Stockholm with friends from overseas.