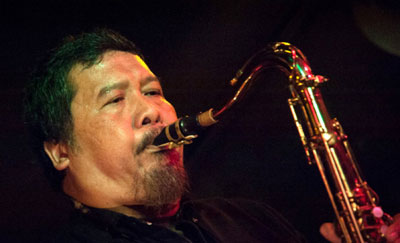 Born in a small province in the Philippines in 1955, Renato studied music with his musician father from a very young age. He started performing professionally at the age of 15 and eventually traveled from his native homeland to Japan and Guam where his skills soon attracted the attention of booking agents from the U.S.

Renato arrived in America in 1981 and meticulously studied and honed his skills during the years he spent on the road touring with various top-40 cover bands. He burst onto the Portland, Oregon music scene in 1992 and has not stopped since. The early years were spent playing the Blues with many notable local groups which led to several yearly awards for ?Best Blues Horn? from the Cascade Blues Association. But his greatest desire was to play Jazz. He got his wish in 1995 when drummer Mel Brown recognized his tremendous talent and asked him to join his group at the newly opened Jimmy Mak?s club. That group, the Mel Brown B3 Organ Group, is still going strong today and gaining new fans every time they play.

Renato has several self-produced CD albums which have all garnered glowing reviews: Blues for Ama; Generations; Straight Ahead; and Nice to be Home. Renato has also been featured on hundreds of recordings for others. In addition to performing and recording, Renato is an in-demand instructor of saxophone and Jazz studies. He has taught for over a decade at the Mel Brown Jazz Camp at Western Oregon University; Battleground High School; Skyview High in Vancouver; and Lincoln and Grant High in Portland.