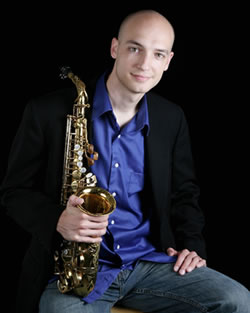 Good stuff! - This is Passionate, intelligent jazz with the proper balance of cutting edge and tradition. Matt is playing with virtuosity and imagination.
- Phil Woods

Matt Vashlishan is a saxophonist originally from the Pocono Mountain area in Pennsylvania. In 2001, he attended the Eastman School of Music in Rochester NY, studying under Walt Weiskopf. Upon graduation in May of 2005, Matt traveled extensively around the world visiting Norway, the UK, the Mediterranean Sea, Europe, Venezuela, as well as the Caribbean while performing on board two cruise ships (the Queen Mary 2-Cunard, and the Golden Princess-Princess Cruises).

Matt has completed his first recording as a leader entitled "No Such Thing." Produced by David Liebman who also appears on two tracks, this recording features several of Matt's compositions as well as a few standards accompanied by an incredible rhythm section (Vic Juris, Tony Marino, and Michael Stephans).