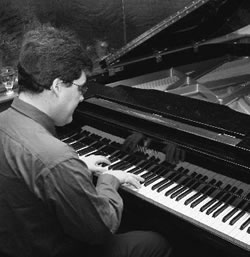 The two are so relaxed together, so in each other's pocket that they make the most convoluted motifs sound effortless ...
- John Kelman.

Paul Hofmann was born in Buffalo, New York in 1962. His parents were Paul's first piano teachers, and he went on to study at the National Music Camp (Interlochen, Michigan) and at the Eastman School of Music, where he now serves full-time on the Eastman Community Music School faculty.

In these capacities Paul teaches private composition and jazz piano, as well as a variety of jazz classes and improvisation workshops ranging from Jazz Composition & Arranging and Jazz Lab Band to Jazz History and Diploma Jazz Piano to three innovative classes Hofmann has introduced into the curriculum: New Inventions & Etudes, Contemporary Popular Composition and Transcribing Music.

Paul is fortunate to have numbered among his students some of the best young jazz pianists and composers in the world, including Christopher Ziemba, Nick Weiser, Matt Podd, Angelo DiLoreto, Joshua Condon, and Matt Valerio. For years, Paul has been proud of his best students' notable successes: performing in the most important venues (including Carnegie Hall), appearing on the most important jazz programs (including NPR's "Piano Jazz"), and winning scores of national and local competitions.

Hofmann is a featured instructor at both of Eastman's annual summer jazz camps, leading combos for both camps (High School and Middle School) in addition to co-teaching a jazz arranging workshop with Eastman's noted composer Dave Rivello. Both this workshop and Paul's annual Kilbourn Hall recital commence during the High School jazz camp a couple weeks before the Middle School camp begins, co-led by Howard Potter and Bill Tiberio.

Paul has performed and recorded with many of the finest musicians, having several notable television and radio appearances to his credit. In addition to Hofmann's dual role as composer and pianist for Sons of Sound Productions (currently appearing on "Escapade," "Interconnection," "Fallen Angel," and "Out of the Darkness" with guitarist Bob Sneider), Paul is represented as composer on vocalist Kevin Mahogany's "Double Rainbow" (Enja Records), "Kevin Mahogany Big Band" (Zebra Records/Mahogany Jazz) and on the Frank Mantooth Jazz Orchestra's "A Miracle" (Sea Breeze Records), as pianist on "The Kansas City Boulevard Big Band" (Sea Breeze), and in both roles on drummer Michael Melito's "'Bout Time!," "My Conception" (both on MHR Records) and "In The Tradition". Paul and Bob have recently recorded a third duo disc entitled "Serve and Volley," released this year on Origin Records. Hofmann is also featured as composer, arranger and performer on "Nocturne for Ava," the current Bob Sneider-Joe Locke film noir project (Origin Records). 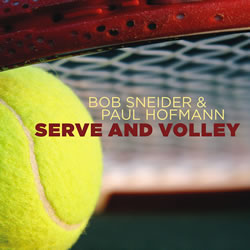