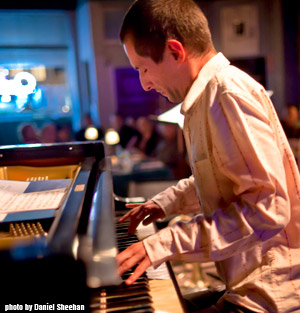 Michal Vanoucek grew up in Zilina, Slovakia, and studied at music conservatories in Bratislava, and The Hague.

Throughout the 90's Michal worked occasionally as a studio musician in the Slovak Radio recording studios, and also participated in the contemporary projects with the Slovak Radio Orchestra as a pianist. Recently, Michal has worked with different musical productions both as piano player and conductor. These include "Orpheus in the underworld", "King and I", "Mahalia", "Kiss me Kate" in Germany and in The Netherlands "Aida", "Lion King", "Tarzan", "Ciske de rat" "Marry Poppins" and "Les Miserables" in Rotterdam. At the North Sea Jazz festival 2003, he participated as a conductor of the string orchestra in Charlie Haden's project "American Dreams" (also with Michael Brecker, Jorge Rossi and Brad Mehldau).

Together with Miro Herak, a Slovakian vibraphone player, Michal is active as a piano player and composer in their band 'As Guests.' Established as a quartet after many personal changes, As Guests won the Pim Jacob Music Prize in 2004 and the Dutch Jazz Competition at the North Sea Jazz Festival 2004. Michal has also been the recipient of the Deloitte Music Award.