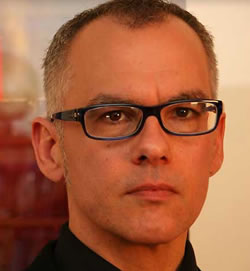 Laurence Hobgood is one of the finest pianists out there. Period.
R.J. DeLuke, All About Jazz

Laurence Hobgood began formal piano study at age 6 in Dallas, TX where his father was chairman of the SMU theater program. At age 12 he was introduced to Blues music through his family's church. Several years later, after moving to Illinois, he began formal training in Jazz music. He attended the University of Illinois where he played for three years in the "A" jazz ensemble led by John Garvey. During that time his classical study continued with Ian Hobson.

After moving to Chicago in 1988, he established a local presence leading his own quintet and joining forces with some of Chicago's premier players like Ed Peterson, Fareed Haque, and most importantly Paul Werlico. The group Trio New, with Hobgood, Wertico, and bassist Eric Hochberg, played to critical acclaim and established a serious connection with Wertico that spans many projects and ensembles.

Hobgood received three consecutive fellowships to perform in the Aspen Music Festival's 90, 91 and 92 seasons. There he played with Clark Terry, Gary Burton, Eddie Daniels, Sheila Jordon, Bob Mintzer, and Mark Whitfield among others.

In 1993 Hobgood met vocalist Kurt Elling and began a collaboration which resulted in Elling's signing with the storied Blue Note label; with Hobgood as his co-producer and musical director Elling received Grammy nominations for each of his first three Blue Note releases. The two of them were named 1995 Chicagoans of the year in the Arts by the Chicago Trbune. They've toured Europe, Israel, Australia, Canada, played Carnegie Hall and the Kennedy Center; Elling's third album "This Time it's Love" reached #1 in national jazz radio play.